A Note About Language

Astute readers will recognize that this book is based on the life of the Chinese woman pirate known popularly by such names as Cheng I Sao, Zheng Yi Sao, Ching Shih, and Shih Yang. The trouble is, in real life no one called her by any of those names. Such spellings are transliterations from the Mandarin (Putonghua) readings of her name. Putonghua may be the “official” language of China, but the people in this story would never have spoken it in daily life, if they even spoke it at all.

The dominant language of the south China coast was, and remains, Cantonese. For this simple reason, names of people and places in this book are written as they would have been spoken: using Cantonese pronunciation. 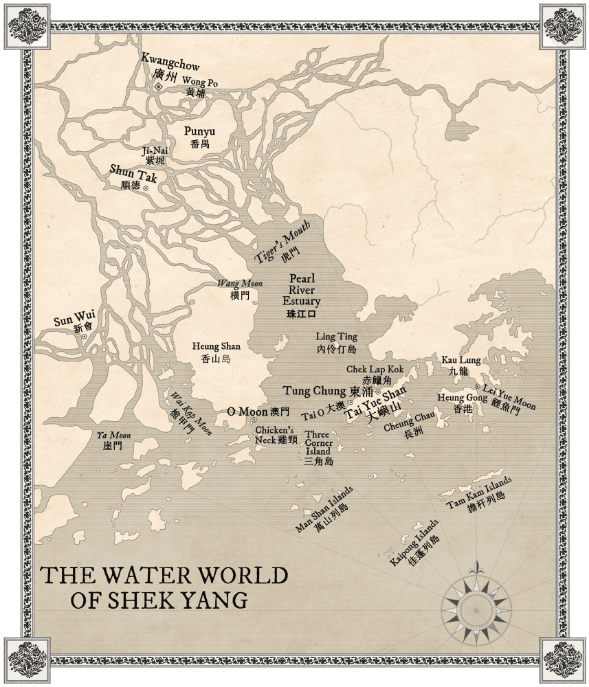 As with people’s names, maps display either the Cantonese place names or English translations of common nicknames used by Chinese sailors. To highlight a few: 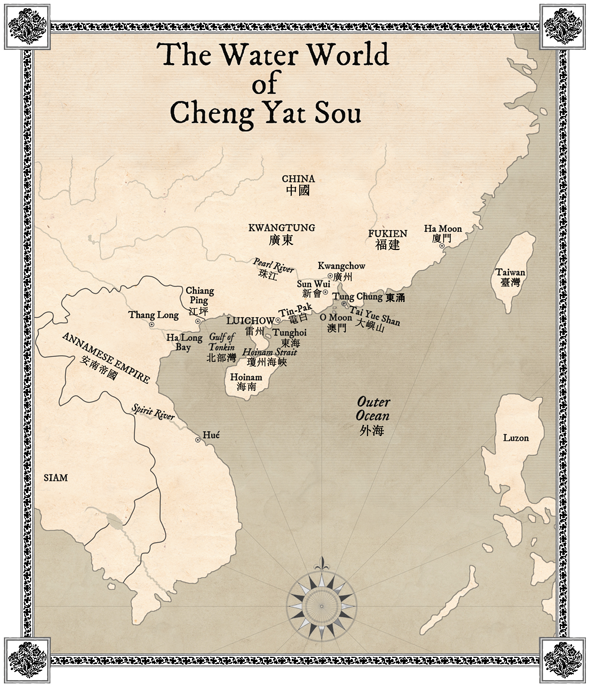 Names follow the Chinese format of the surname followed by the given name(s). Shek Yang’s family name, therefore, is Shek. To help you in any cross-research you might wish to do, the Mandarin pronunciations are in brackets.

Born 1775, Sun-wui (Xinhui), Hok Shan County
Former prostitute on a ‘flower boat’ floating brothel in Kwangchow. Little is known of her early life. Much of what is described in this book is based on accounts of other young Tanka women sold into prostitution by their families.

Born 1765, Lei Yue Moon, in what is now Kowloon, Hong Kong. The eldest of seven sons, his name literally means “Cheng Number One”.
Descended from a pirate dynasty dating from the 17th century. His ancestor Cheng Chien was a close associate of the pirate rebel hero Cheng Sing-kung (Koxinga). In 1735 two of Cheng Chien’s grandsons established pirate bases near to one another, one in Tai Yue Shan (Lantau Island), where Cheng Chat (below) was born, while Cheng Yat’s father settled in Lei Yue Moon, where he built the Tin Hau temple which stands there today. Cheng Yat later formed the Red Flag Fleet.

Born 1760, Tai Yue Shan (Lantau Island). The youngest of seven sons, his name means “Cheng Number Seven”.
The heir to his father’s substantial pirate fleet, he commanded a wide territory in and around the Pearl River Delta and was considered the most powerful pirate leader in the region. He was recruited as a naval mercenary in the first and second campaigns of the Annamese (Vietnamese) civil war in 1788 and 1801.

Cheng Chat’s number one wife. Nothing is known of her, not even her name. As primary spouse to the region’s most powerful pirate, she would have been the matriarch of the sea bandits, and therefore assumes a prominent place in this story.

Born 1786 into a fishing family near Gong Moon, Kwangtung. Famously abducted as a teenager while out fishing with his father, Cheng Yat took him as his catamite, a position traditionally reserved for favorites of a ship’s captain to be groomed for adoption and inherited command. His stunning good looks and charisma combined with a penchant for ostentatious clothing made him a legend among pirates and coastal villagers alike.

Born (date unknown) in Wu-shek Village, Leichow; real name Mak Yau-kam. His nickname means “Wu-shek Number Two”.
Kidnapped in his teens by Cheng Yat’s fleet, he was groomed to become a pirate leader, proving his worth by extorting blackmail up and down the Kwangtung coast. He eventually formed the Blue Flag Fleet, which controlled western Leichow Peninsula and Hoinam Island, assisted by his two brothers.
He had as many as five wives at the same time.

Born 1771 in Pan Yu County, Kwangtung,
Indentured at a young age to a Kwangchow scribe, he was rare among the boat people in his being able to read and write. The hold of his flagship was filled with books and he read during moments of leisure.

Born (date unknown) in Tunghoi, a port in eastern Leichow; real name Ng Tze-ching. Calling himself after his home town, the “Pa” in his nickname is rendered in different accounts with various homonym Chinese characters meaning either eight, uncle, or scourge. Sometimes called Wu Sap-yi-ji (Eleven-finger Wu) because of an obvious birth defect.